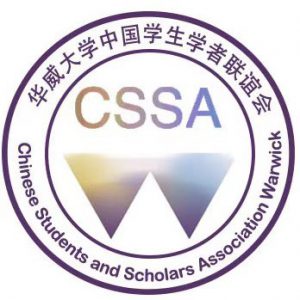 Chinese Students and Scholars Association in the University of Warwick (CSSA Warwick), founded in 2019, is a service-oriented, public welfare, and non-profit association. CSSA Warwick is the only organization in Warwick that officially supported by the Education Section of the Chinese Embassy of the People’s Republic of China. It is operated by Chinese Scholarship Council (CSC) funded Ph.D. students. The members and service objects of Warwick CSSA are all Chinese students and scholars at the University of Warwick (including those for degree education, and visiting students and scholars undertaking short-term exchanges and cooperation).

The aim of CSSA Warwick is to build an open and win-win platform among students, scholars, universities, enterprises, and regions. CSSA Warwick will actively cooperate with the University of Warwick, the Chinese Embassy Education Section, and China Scholarship Council (CSC), and be committed to improving the management and the service quality of government-sponsored students and scholars. Especially in the face of any emergency events, CSSA Warwick will facilitate the communication and coordination among the individuals, the university and the foreign affairs agency of the Chinese government to protect the interests of both students and the university.

CSSA Warwick aims at building a bridge for cultural exchanges between the UK and China. UK and China have already confirmed at the national level that these two countries are in the “Golden Age” of cooperation and development. In future, an in-depth understanding and mutual respected culture will provide a solid foundation for this development. CSSA Warwick will play the role of a cultural exchange window, organizing regular cross-cultural communication activities that target at students, scholars, and industry leaders from both countries.